The past years have witnessed a great deal of activity in the field of distribution testing— so much, in fact, that it has become a bit of a challenge to even keep track of what’s happening and what has already happened. While this blog post is not going to be a comprehensive (comprehensible, maybe?) survey or summary, it hopefully will at least shed some light on what distribution testing is — and where to look at if interested in it. 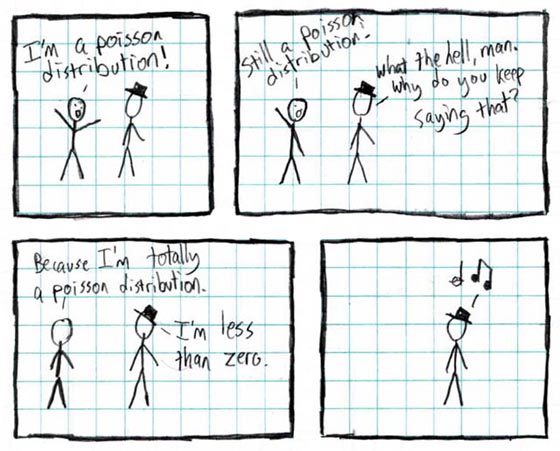 Recall that in the “vanilla” property testing setting, one is provided with access (typically query access) to an object \(\mathcal{O}\) from some universe \(\Omega\) (typically the space of Boolean functions over \(\{0,1\}^n\) or the set of \(n\)-vertex graphs), a distance measure \(\textrm{d}(\cdot,\cdot)\) between such objects (usually the Hamming distance), a property \(\mathcal{P}\subseteq \Omega\) (the subset of “good objects”) and a parameter \(\varepsilon \in (0,1]\). The goal is to design a randomized algorithm that (i) accepts with high probability if \(\mathcal{O}\in\mathcal{P}\); and (ii) rejects with high probability if \(d(\mathcal{O},\mathcal{O}’)>\varepsilon\) for every single object \(\mathcal{O}’\in\mathcal{P}\).

The distribution testing setting is very much like this one, with of course crucial twists. The object is now a probability distribution \(D\) over a (discrete) set, typically \([n]=\{1,\dots,n\}\); the access model is usually a sample oracle, providing independent samples from \(D\) on demand; the distance is the total variation distance between distributions (or, equivalently, the \(\ell_1\) norm between the probability mass functions).

This brings in some quite important distinctions: for instance, randomness is now inherent: even taking a number of samples beyond any reasonable bound will not bring the probability of failure of the algorithm to zero, this time.

The field made its debut in TCS with a work of Goldreich and Ron [5], who considered the question of testing if an expander graph had mixed — that is, if the distribution induced on its nodes was uniform. However, it is only a tad later, in a work of Batu, Fortnow, Rubinfeld, Smith, and White [6] that the setting was formally defined and studied, for the specific problem of testing whether two unknown random variables have the same distribution (closeness, or equivalence testing).

This started a line of work, which analyzed the sample complexity of testing uniformity (is my random variable uniformly distributed?), identity (is it distributed according to this nice distribution I fully know in advance?), independence (are my random variables independent of each other?), monotonicity (is the probability density function increasing?), and many more. Over the course of the past 16 years, many breakthroughs, new techniques, new questions, and new answers to old problems were made and found. With surprising twists (if your domain size is n, then surely \(\Theta(n)\) samples are enough and necessary to learn an arbitrary distribution; but who would have thought that \(\Theta(n/\log n)\) was the right answer to anything? [7]). And game changers (general theorems that apply to many questions or blackbox lemmas are really nice to have in one’s toolbox).

And that’s barely the tip of the iceberg! For more in-depth or better written prose, the interested Internet wanderer may want to consult one of the following (usual non-exhaustivity caveats apply):

For the more video-inclined, there are also quite a few survey talks available online, the most recent I know of being this talk by Ronitt Rubinfeld at COLT’16.

Note: this section is taken verbatim from my survey [4] (Section 1.2).

It is natural to wonder how the above approach to distribution testing compares to classic methods and formulations, as studied in Statistics. While the following will not be a thorough comparison, it may help shed some light on the difference.

And while the above has hinted at all that has been done so far in the area, there is still plenty ahead — many new questions to be posed, answered, revisited under another light, tackled with new insights and techniques, and connections to be made. As a small sample (sic), we list below a few of the recent developments or trends that herald these exciting times.

What if modeling the access to the data as a source of i.i.d. samples was not enough? Because we can— the situation allows it— or because we want— what we are trying to achieve is best modeled a bit differently? If we get more ways to query it, can we do more, and by how much?

This recent line of work [20,21,22,23,…] offers many challenges, ranging from the right way to ask (what to model, and how?) to the right way to answer (intuition if often off the hook, in these uncharted waters?). New tools to design, intuition to build, and problems to consider…

And of course, even if many of the “classic” problems have by now been fully understood, there are many more that await… from class testing [16,11,17,18] to twists on old questions (uneven sample size for closeness?) to new questions entirely [19], there is no shortage. Not to forget there is a stronger connection with practice to build, and asking the “real-worlders” what makes sense to consider is also unlikely to stop producing challenges.